Although I still have Launceston and Cradle Mountain posts to catch up on this was our last view of Devonport as we departed the Apple Isle….what an amazing place …

I think we left our run to Cradle Mountain a little late – by the time we arrived in this region it was freezing, rain was coming in sideways and any thoughts of hiking through this beautiful area had turned into camp fires and hot chocolate longings!  However – our first stop after Launceston was delightful, the little town of Deloraine – beautiful, quaint, featuring a meandering river with modern art on the banks and a supply of hippy types camping out on the sidewalks! I loved this spot, nestled in between mountain ranges with a melting pot of tourists, locals, hippies, overseas back-packers and picturesque scenery. 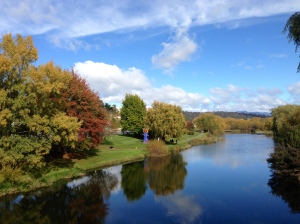 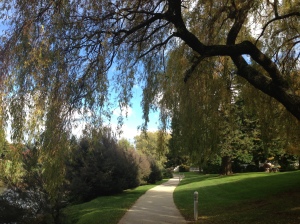 Our camp site was about half an hour on from here at Mole Creek – an unfortunate name for a beautiful spot at the foot of Cradle Mountain. We had tried to book a powered site at Cradle Mountain itself however none were available – after freezing our butts off all over Tasmania we decided that no heater was a deal breaker so we booked at Mole Creek – this turned out to be a stroke of luck. The van site was right next to one of those crystal clear streams that should be in an english fairy tale but was reportedly inhabited by platypus – which weren’t sighted despite the girls searching high and low. The husband was delighted as camp fires weren’t only allowed but fire wood supplied AND we had power for a heater – funny what becomes nirvana after weeks of camping. Only draw back was the possibility we (as in Craig!) offended the lovely group of young french back-packers next door by putting on a terrible fake french accent. This was partly because I’m walking around repeating french phrases constantly as I learn and partly because he just can’t help himself – seems to think that putting “la” in front of everything and putting on a bad accent is the equivalent of knowing French!  Level of french affectation seemed to be proportional to the amount of red wine consumed around our camp fire so hopefully they were oblivious as well by that time of night. 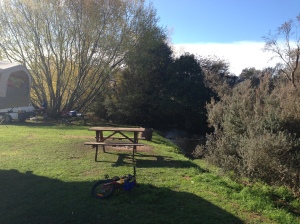 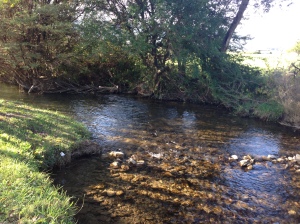 Best of all was this area had relatively clear weather compared to up the mountain so while we did venture up to the peak and wander around some of the child friendly tracks the constant rain and wind (avoiding the wombat poo at every step and turn) made us very happy not to be camping up the top! W

What’s with the Weather?!

This was also the site of the girls fifth birthday celebrations so will always hold a special place in our memories of Tasmania.  The day was marked by lamington cake, balloons, small toys (emphasis on small) and exploring the local caves – the glow worms were a huge hit as was the point at which the guide turned out all the lights in the deepest darkest spot possible.

Camper Party (it was raining)

Making a Wish – hopefully not to go home! 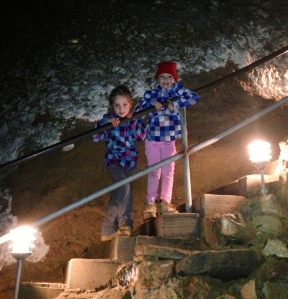 Celebrating in the Caves!

I do wish we had made Cradle a priority when we arrived, it’s a disappointment not to have completed some of the walks around this incredible area, however the husband has pledged to bring the girls back to do the overland track when they are old enough – there was no mention of taking me though, maybe he thinks I will be too old by then???!!!

It was with great reluctance that we packed up and left our cosy little corner at the Bay of Fires however with less than a week left we still had Cradle Mountain on the list of ‘must do’s” so we headed off to our first stop-over in Launceston.  This was supposed to be just a chance to wash clothes, buy food, have really, really, really long hot showers (after five days free camping) and perhaps sample a little of the local Tamar Valley wines (just a little, I’m still trying to dry out after the first month on holiday). So we booked into a van park just outside of Launceston – it was a little uninspiring but as mentioned we really only wanted their washing facilities anyway!  Launceston however turned out to be a delightful sojourn, ticking off all the key tourist attractions in record time but nonetheless having a great time doing it.  We toured the Tamar Valley and found a Pinot Gris that we fell in love with while the girls fell in love with the local winery doggy who lapped up the attention and stole their toys.

The platypus and echidna house visit was supposed to be for the benefit of the girls however I was almost as tickled by the cute little bundles of spikes that trundled around feet and stuck out almost terrifyingly long tongues to lap up food. Disturbingly discovered that male platypus have poison spikes in their paws that causes excruciating pain that can’t be relieved by morphine and will take an adult six months to recover from – not worth thinking about what happens to children – who said Australian mammals are all cute and cuddly??!!  Personal favourite may have been the monkeys in central park – a city with it’s own monkey enclosure in the centre of town, who would have thought?! We spent a long time watching the monkey antics, goo-ing over the baby monks and generally being entertained (remarkable similarities to our children I thought). Last of all Cataract Gorge – wow, what an amazing spot to have in your backyard, the photos speak for themselves…

Cutest Native on the Planet

The Inns Girls at the Look Out – Cataract Gorge

Restaurant in the Hills – Cataract Gorge 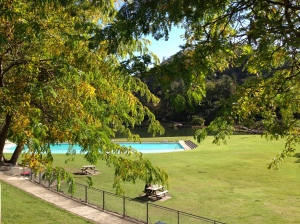 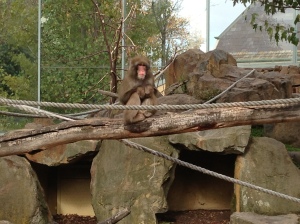 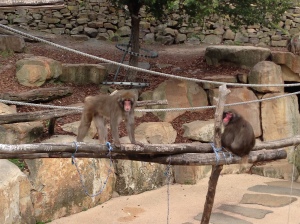 So that was it for our tourist activities in Launceston – on a personal note the setup and pack up of the camper is now occurring like clock work and we have all adjusted to living in a very confined space – mostly.  Every now and then I at least feel the need for my own company – that might only be having the opportunity to shower alone (minus the children before anyone gets any funny ideas!) but even that’s luxury in a life lived in a 5×3 metre space.  We may get through this holiday with all family members intact after all….standby though!

Now I am preceding this post with the statement that I was wrong.  Doesn’t happen very often ( just ask the husband, he’ll tell you) but in this case, I was wrong – wrong to worry over lack of power, wrong to be concerned over no playground and wrong to delay free camping for so long!  Being by the beach, camped in the sand, visited by Pademelons (see photo below if anyone is confused) and watching the girls climb tree’s, roast marshmallows around the fire and hunt for shells on the beach reminded me of what this trip is really about. 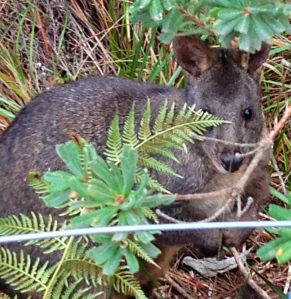 Although technically setting up and every day routine should be no different to a caravan park for some reason it was much more relaxed.  Perhaps because we didn’t need to travel around each day as we were living on the edge of one of Australia’s wonders in the Bay of Fires or maybe the ritual of having fire is actually some kind of primitive trigger for feelings of well being!  Whatever the reason this was another little haven in Tasmania and to really make it memorable we were camped right next to another family traveling Australia – although Debbie and Matt with their three kids put our ambitions to shame being twelve months into their planned 21 month trip around Australia!  We learned some invaluable lessons from this lovely lot and picked up some great tips for the routes they had already travelled. 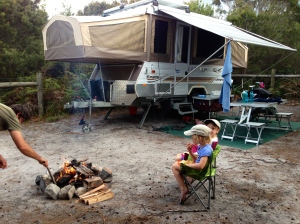 Our kids played together beautifully, making cubby houses in the trees while they roamed free between the camp sites.  I wouldn’t have missed meeting these guys for the world, as with all the people we have met in Tasmania – there has been no shortage of good conversation, interesting stories and fascinating characters!

As for our the relaxation factor – for the first time on the trip I actually read a book, had the opportunity to sit around a fire staring at the flames and started learning French (now I look like a lunatic walking around muttering French words to myself but that’s another story!). As for the husband – he was in paradise, getting to practice his refined art of pyromania and impressing all and sundry with his camp oven cooking skills (the lamb was incredibly good!)

In particular camping at Cosy Corner taught us:

A quick hike today took us into the Apsley River Waterhole – we weren’t expecting much so this calm, peaceful rocky oasis was a delightful find. The still waters trickled through rocks and the waterhole was clear and deep – … Continue reading →

We didn’t think anything was going to live up to the playground right in front of our campsite at Coles Bay – but we were wrong.  Moving into the Big 4 at St Helens, right on the edge of the Bay of Fires we discovered a jumping pillow (!!!), a playground and games room that we could camp practically in front of.  I may or may not have been seen jumping around on the pillow with the kids a few times – as always there is no photographic proof (I don’t think). It seems this has become the kids paradise tour of Tasmania – which we are going to put an immediate stop to by going free camping after we check out on Wednesday.  Of course it’s going to be a stark contrast after camping Disneyland but I’m sure the kids will cope – it’s a matter of the adults coping with the whining!

So in line with our aim of spoiling the kids fun we went and looked at all the spots the locals had recommended along the Bay of Fires for free camping.  I may have also been a little reluctant, having been accustomed to power, running water and shower blocks (sigh) but as the photos will attest to, this place is the Tasmanian Whitsunday’s.  Before all the Queenslanders get their knickers in a twist I know it can’t compete with the water temperature but otherwise there is white sand, turquoise water and miles and miles and miles of beautiful beaches.  We are slowly luring the kids in with promises of night beach fires, toasted marshmallows and beach frisbee – plus hunting down every piece of detritus the ocean throws on the sand and declaring  ‘treasure’ so it can stink out the camper. 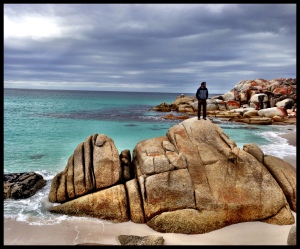 The other highlight of the day was visiting the Pyengana Dairy Company headquarters, set right in the middle of the lush green grazing fields with a mountainous backdrop where we also trekked to one of the highest water falls in Tassie.  The “Holy Cow Cafe” offered tastings of their traditionally made cheese (to die for), home made ice-cream and milk that hadn’t been homogenised, leaving the thick layer of cream on top. This is almost impossible to obtain on the ‘mainland’ so I’m devastated about leaving the land of cream topped milk now. 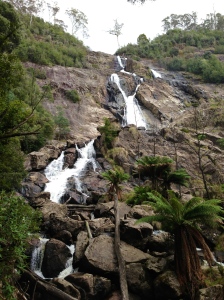 This was all topped off for the little people by seeing a real working dairy and lots of frolicking calves – although it made me realise what little city slickers we are raising when they became overly excited every time a cow ‘mooed’ and I had to explain what an udder was!!

Not a boat person but having fish and chips in the harbour of our current destination St Helen’s this evening water shot was too good to ignore.

Until We Come Back

The Plan (subject to change!)

The Inns Family does Australia
Blog at WordPress.com.