Deciding we hadn’t tortured the children for a while we headed up to the Porongurup National Park (45 kms North East of Albany) so we could drag the blossoms up to the top of Castle Rock to see the Granite Sky Walk.  The walk itself was 2.2 kms and quite steep towards the end, climbing through beautiful green karri forest – however every time we came to a sign saying how far we had yet to climb it came as a shock – surely we’d gone further than 500 metres?!  The girls impressed us yet again with their tenacity, everyone making it to the top despite Layla asking every two minutes when would we get there and Sophia playing David Attenborough (still), stopping to stare in amazement at every new ant hill on the way up. 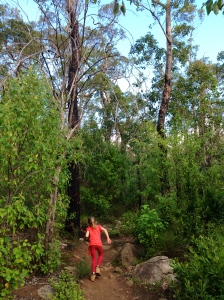 Heading up – too much energy to start with! 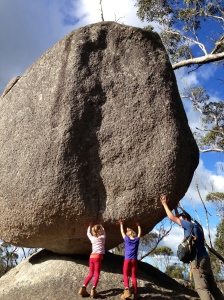 Balancing rock – how many people have taken this shot?! 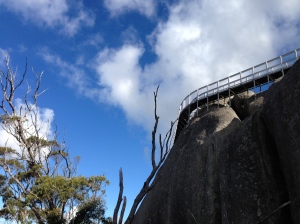 View to the top

The Sky Walk itself involved a ‘scramble’ up the massive granite boulders using well placed metal foot and hand holds to reach a vertical ladder up a rock face to the viewing platform – so we elected for the adults to go up one at a time while the girls played on the lower karri lookout.  This incredible piece of engineering had to be seen to be believed, freely suspended 570 metres above sea level on the Eastern side of huge granite rocks the brochures tell me are more than 1,000 million years old. The vista was also breath-taking, lush green farming land, more karri forests, vineyards and the Stirling Ranges in the distance.  It didn’t pay to stand too close to the edge and look straight down on the Eastern side though, vertigo inducing doesn’t even begin to cover that sensation. 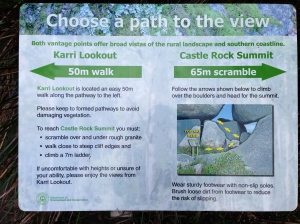 Elected not to have the kids “scramble”! 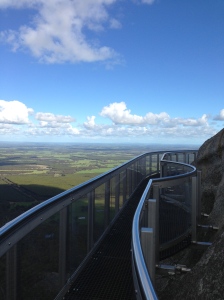 Walk with a view – don’t look directly down though 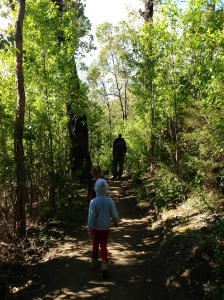 Going down was much quicker

On our last day in Albany the weather seemed to decide it had indulged the Queenslanders enough and returned to what is more expected down South when it’s nearly June – cold, wet and blustery.  We had done most of our outdoorsy touring so headed to “Whale World” to hide from the elements. I really should have paid more attention the tourist brochures – initially I thought this was a whale information tour, turns out to be the last Australian whaling station that has been preserved complete with a whale ‘chaser’ vessel.  The girls had a ball climbing through and over the whaling ship (the beds were about their size, were men all short in those days??!) however the actual historical revelations about the whaling industry required a strong stomach – the guided tour of the site included the ‘flensing’ deck, boilers and a massive saw they used to detach the poor old whales heads. However there was some great general information about whales and even the suspended skeleton of a massive blue whale (but apparently this 24 meter behemoth is half the size of the biggest known blue whales). 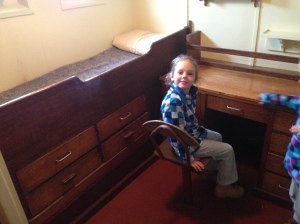 Inside the whaling ship 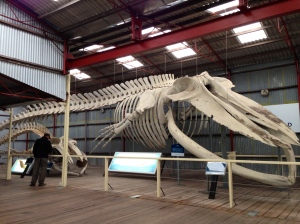 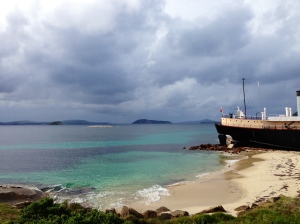 The beautiful harbor where wholesale slaughter used to take place 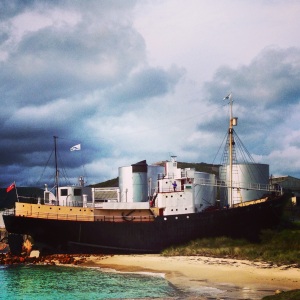 Returning from Whale World (immensely relieved that most of our species had realised that whaling is barbaric) the weather became even wilder, to the point where we removed the girls from the campervan and installed them in the Prado with a movie – just in case!  Massive wind gusts off the ocean were rocking our little home and even once we decided it was safe enough to return Craig threw a tie down strap over the top and lashed us to the ground as added security.  Sleep was in short supply on our last night with the wind, rain and noise and we were actually relieved to be on our way – Albany was fabulous but the wild wind gusts that come with coastal winters were a little unnerving!

Until We Come Back

The Plan (subject to change!) 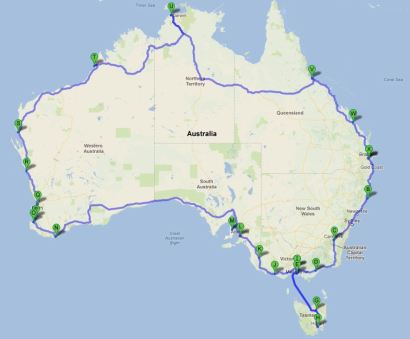